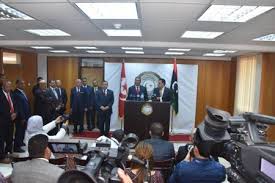 Tunisian Premier indicated Friday during an unannounced visit to Tripoli that the Tunisian consulate will soon re-open after it was closed in June last year following an abduction of diplomats.

“We are accelerating steps in order to open the consulate as soon as possible,” Habid Essid said at a joint press conference with Libyan counterpart.

Tunis last year in June shut down its consulate in Tripoli following the abduction of some of the consulate staff who would be released later after long negotiations.

Essid said his visit was to support the new Libyan authorities who have the “historic” role of laying down foundations for a new Libya, restoring security and fighting terrorism.

He added that the task awaiting the Libyan authorities is purely Libyan internal affairs.

“Tunisia supports Libyans so that they attain the goals set.” Essid said.

On his part, Libyan nominal Prime Minister Faiez Serraj indicated that joint commissions will be established to examine security measures at the border crossings and that flights from and to Tunis-Carthage airport will resume, Tunisian National Press agency reports.

Tunisian authorities last year in December suspended all in and fro flights between Tunis international airport and Libya after Tunisian authorities were tipped that terrorists based in Libya were plotting attacks against Tunis-Carthage airport following November suicide attack in Tunis which killed 12 members of Presidential security unit.