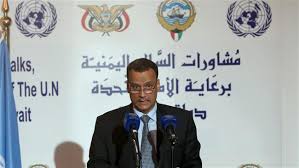 The delegation of the Yemeni government to peace talks, led by Foreign Minister Abdulmalek al-Mikhlafi, said they asked UN mediators on Thursday to insist on the respect of the cessation of hostilities as attacks on “civilians” in Taez continue.

The delegation had pulled out of the Yemeni peace talks in Kuwait on Sunday due to ceasefire violations by the Houthi Movement before returning to the talks on Wednesday.

Updating reporters on the ongoing talks, UN special envoy for Yemen Ismail Ould Cheikh Ahmed said the De-escalation and Coordination Committee (DCC) would investigate clashes on the ground and provide reports to protect the peace talks while hoping that “the positive atmosphere in the talks will also be reflected in the security situation.”

He admitted that there has been a number of breaches and it is “worrying,” underlining that “the only way to resolve the conflict in Yemen is through the conclusion of a political settlement.” The UN envoy said they are “determined to reach an agreement and this commitment will not wane over time.”

The war in Yemen has been going on for more than a year and both sides seem to be struggling to gain the upper hand while extremist groups such as Al-Qaeda in the Arabian Peninsula (AQAP) and the Islamic State gain grounds.

AQAP militants however retreated from the towns of Zinjibar and Jaar, southwestern Abyan province, after tribesmen urged them to leave rather than resist an offensive of pro-Hadi forces backed by the Saudi-led coalition forces.