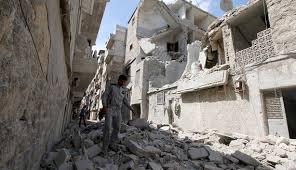 The bombardment of Aleppo will continue after a partial ceasefire agreed upon on Friday evening excluded it from the areas covered.

Russia, Assad’s main ally, has stressed that it supports the bombardment of the city by Damascus following a request by the U.S for Moscow to pressurize the latter in order to put an end to it. Russian deputy foreign minister Gennady Gatilov said “no, we are not going to put pressure on (Damascus) because one must understand that the situation in Aleppo is part of their fight against the terrorist threat.”

Assad’s government refers to the rebels as terrorists but residents in Aleppo claim that the airstrikes and barrel bombs are hitting civilians. Aleppo is a strategic city and its control is divided between rebels and government forces.

The bombardment of a hospital in the city over the week renewed international attention of the effects of the war in the city and the International committee of the Red Cross (ICRC) said Aleppo is “no safe place anymore” as it urged “for an immediate halt in the attacks.”

The UN high commissioner for human rights, Prince Zeid Ra’ad Al Hussein, on Saturday condemned the “monstrous disregard for civilian lives” by all parties to the conflict and called for urgent de-escalation.

The war in Syria has been ongoing for more than five years and there is still no sign of reconciling the demands of the warring parties after the just concluded round of talks ended with the rebel coalition High Negotiations Committee suspending its participation due to the bombings.

For several days, violence has intensified in Aleppo, where around 250,000 people still live, aid agencies said. At least 244 civilians have been killed after being caught up in the fighting. Opposition groups are already accusing Assad and his government of committing war crimes in Aleppo.