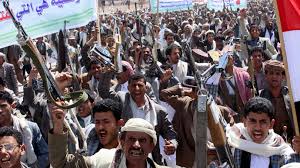 Yemeni peace talks scheduled to take place in Kuwait are being delayed due to the absence of the Houthi Movement. The delegation has not left Sana’a and held a demonstration in the city with its leader, Mohammed Ali al-Huthi stressing that “our presence in Kuwait requires a total halt to aggression.”

He demanded “a guarantee that warplanes will no longer violate Yemen’s sovereignty.”

The talks were scheduled to begin on Monday and the Yemeni delegation led by Foreign Minister Abdulmalek al-Mikhlafi is already in Kuwait. The delegation deplored the “irresponsible behavior” of the rebels and urged the international community to show “firmness in the face of their contempt for the peace efforts.”

A western diplomat claimed that the Chinese ambassador to Yemen delivered a message to the rebel group on behalf of the five permanent members of the UN Security Council stating that “we understand your concerns but you need to carry your worries to Kuwait and put them at the table.”

Since the Houthi Movement took over the northern part of the country, they have resisted a military campaign led by Saudi Arabia for 13 months but lost control over some of the territories. Riyadh hoped for “the success of consultations” hours before UN special envoy Ismail Ould Cheikh Ahmed announced that the negotiations “will be delayed.”

The UN Special envoy stressed the need for the parties to “take their responsibilities seriously and agree on comprehensive solutions.”

The Yemeni war gave room to al-Qaeda and the Islamic State to strengthen their presence in the country.