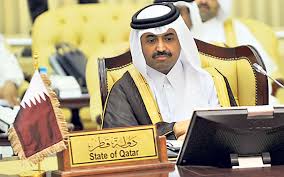 The meeting between OPEC members and non-OPEC members in Qatar on freezing oil production levels based on the January data ended without any deal following Saudi Arabia’s stance that Iran must be present at the meeting before a deal could be reached. Tehran has downplayed the importance of agreeing on a freeze and did not attend any of the meetings arguing that it has to reach its ante-sanction production levels.

Iran had promised to send a delegate to the meeting but made a U-turn late Saturday. Oil minister Biajn Namdar Zangeneh told state TV that “we can’t cooperate with them to freeze our own output, and in other words impose sanctions on ourselves.”

Russian oil minister Alexander Novak sounded disappointed because he came to Doha hoping to seal a deal. He told Reuters that Saudi’s demand for Iran’s presence was “unreasonable” while Oman’s oil minister Mohammed al-Rumhy was quoted by Al Jazeera saying “until this morning we thought there would be a deal. We didn’t know Iran wasn’t coming.”

The possibility of organizing another meeting is unclear and Qatar’s energy and industry minister and current OPEC President, Mohammed bin Saleh al-Sada, stated after the meeting that “we concluded we all need time to consult further.” He added that “the fundamentals of the market are generally improving” although analysts have noted that the market is being overloaded with a surplus of between 1million and 2million barrels per day. Oil prices have fallen by more than 70% since mid-2014.

OPEC members will be meeting in June and current OPEC president said they “don’t know how the future will unroll but it was a sovereign decision by Iran” to sideline the Doha meeting.