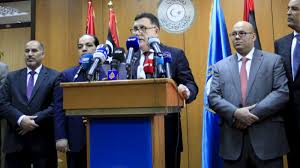 The arrival of the Government of National Accord (GNA) in Tripoli on Wednesday increased the number of governments claiming legitimacy and authority in Libya to three.

On Friday prime minister-designate Fayez Serraj made his first public appearance in Tripoli at a mosque for the Friday prayer before he met civilians at the martyrs’ square.

The tension between the GNA and the Tripoli-based government seems however to be dying down after the Tripoli Government published on its website that Prime Minister Khalifa Ghweil’s “rejection of the so-called Presidency Council will be in a peaceful and legal manner without any use of force.”

The UN Security Council and the European Union manifested their support to the GNA. The EU approved sanctions on Ghweil as well as on Presidents Agilah Saleh Issa and Nuri Abu Sahmain of the parliaments in Tripoli and Tobruk respectively.

French Foreign Ministry spokesman Romain Nadal described the sanctions as a “first important step in support of the government of national unity” and did not rule expanding them to “other individuals who could prevent the installation” of the GNA. The U.N Security Council said the presidential council should “immediately begin its work in Tripoli to broaden the basis of its support and to tackle Libya’s political, security, humanitarian, economic and institutional challenges, and to confront the rising threat of terrorism.”

The Tripoli-based government stated that it will not cling to power, but warned that “if this (presidential) council claimed power or assaulted state institutions, it would be considered a coup against the constitutional legitimacy and declaration.”