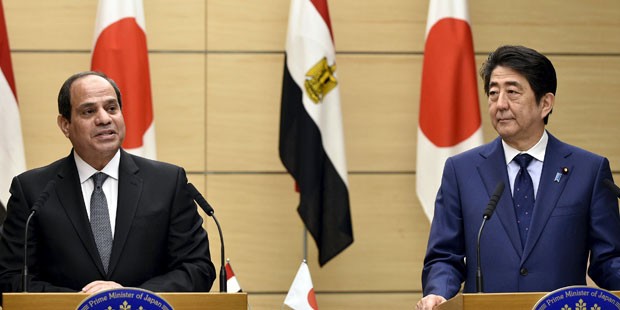 Japanese Prime Minister Shinzo Abe Monday announced a $17.7 billion business project of Japanese companies in Egypt, funds that will weigh heavily into the Egyptian crumbling economy in need of foreign reserve and cash.

Abe who made the announcement after talks with visiting Egyptian President Abdelfattah El-Sisi did not disclose the type of projects to be developed in Egypt, but some press reports hinted the funds will be injected among others in electricity and the railway system.

Besides economic cooperation, the two leaders also agreed to develop security cooperation to counter terrorism and insurgency in the Middle East.

“We’ve reached an agreement to bolster our cooperation to eradicate terrorism and extremism, which have transcended particular regions or national borders and have come to pose a threat to peace and security of the international community,” Sisi said at the joint news conference with Abe.

Two Japanese nationalized were beheaded last year by IS fighters after Tokyo failed to meet demands of the extremist group.

The two countries also agreed to develop an education partnership under which Japan will receive 2,500 Egyptian students over the next five years.

Before the Egyptian President leaves Japan on Wednesday, Japanese and Egyptian companies are scheduled to sign several agreements.