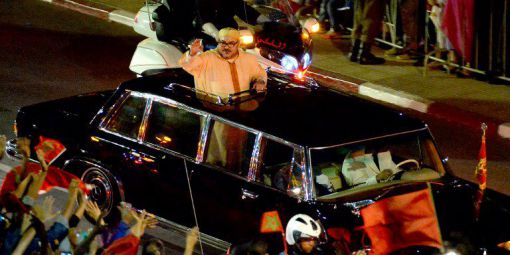 The local inhabitants of all walks of life and tribes of the Moroccan Sahara provinces have hailed the new visit King Mohammed VI is paying to the region, expressing joy and happiness over such a visit that heralds new development projects likely to upgrade living standards in the region.

They massively welcomed the Sovereign in both cities of Laayoune and Dakhla chanting “Long life to the King” and waving the Monarch’s photos along the route of the royal procession, as shown in TV footage.

It is King Mohammed VI’s second visit to the region in three months. In Laayoune, the Monarch has launched and inaugurated several socio-economic projects destined to create jobs for the local inhabitants and contribute to fostering the region’s socioeconomic development.

Among the projects launched, there is a technology park that will include teaching and research departments that will focus on the Sahara environment, a support pole in the economic development of the South, a cultural center and social facilities.

The high-tech Foum El Oued-Laayoune center will create nearly 1.8 million working days during its construction and will provide 1,200 permanent jobs when completed by 2022.

The high-tech park will include the Mohammed VI Polytechnic University, a high school of excellence and an industrial competence center.

These new structures and entities will reinforce and diversify the training offer in the southern provinces and will meet the needs of the region population in matters of higher education & academic research and make of the center a reference institution in Morocco and in the sub-Sahara region.

These landmark undertakings are part of a global development model set out for the region. The new royal visit to the Sahara comes as a follow-up to the King’s trip to the region last November to mark the 40th anniversary of the Green March.

During that visit, the King launched large-scale projects destined to improve the area’s infrastructure and transform the region into a model of integrated development as well as a link between Morocco and Sub-Saharan Africa.

“We want this development model to seal these provinces’ integration into the unified homeland and to enhance the influence of the Sahara region as an economic hub and a crucial link between Morocco and its African roots,” the Moroccan monarch had then said in a nationwide TV address made from the city of Laayoune on the occasion of the 40th anniversary of the Green March.