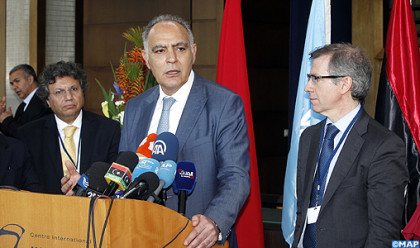 The UN-brokered peace deal inked Thursday in Morocco by representatives of Libyan warring factions has put the North African nation in the spotlight, commending its role as peace facilitator.

“We would like to express our gratitude to the Kingdom of Morocco for its efforts to advance the UN talks”, said U.S. State Department spokesman John Kirby.

“The United States welcomes the signing of the political agreement in Morocco, by Libyans, prepared based on a year of UN-facilitated political dialogue”, added Mr. Kirby.

The agreement provides the “framework for establishing a unified Libyan Government of National Accord, and we applaud the efforts of those courageous Libyan leaders to rebuild a united Libya”, stressed the US Department official.

“We stand ready to support the implementation of the political agreement and are committed to providing the unified government full political backing and technical, economic, security, and counterterrorism assistance”, added the spokesperson.

For his part, Secretary of State John Kerry hailed the Libyan-UN peace deal signed in Morocco that will establish “a unified Libyan Government of National Accord”.

“We salute these courageous Libyans who stand ready to rebuild a united Libya and who are determined to move the country forward”, said Mr Kerry, noting that “all Libyans have a role to play as the political transition continues”.

UN Secretary-General Ban Ki-moon thanked King Mohammed VI and the Government of Morocco for hosting the signing ceremony of the Libyan political accord, saying “it is a critical step in continuing Libya’s post-revolution transition after months of turmoil and uncertainty”.

The UN Chief also congratulated the Libyan people on this important achievement and expressed hope the new peace deal would put Libya back on the path of building a “democratic State based on the principles of inclusion, human rights and the rule of law”.

Paris welcomed the signing of the Libyan political agreement in Morocco today, saying it will support with its European Union partners and the international community the new Libyan authorities.

The UK is firmly committed to securing a stable and prosperous future for Libya, said Mr. Cameron.