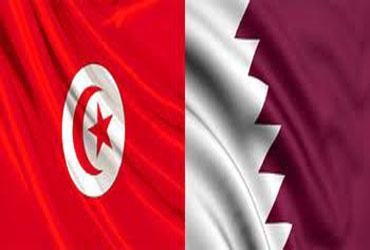 Tunisia and Qatar signed nine cooperation agreements, executive programs and Memorandums of Understanding at the end of their 6th high joint committee meeting in Doha presidedover by Prime Minister Habib Essid and Qatari Prime Minister Sheikh Abdallah Bin Nasser Bin Khalifa Al-Thani who also doubles as the interior minister. Before the meeting, the Tunisian prime minister delivered a message from President Essebsi to Emir Sheikh Tamim bin Hamad Al Thani.
Discussions held between the two prime ministers was an opportunity to strengthen bilateral ties and Essid was pleased that they shared similar views on major political issues in the region and consider terrorism as a global issue which requires regional and international mobilization to overcome it. He also met with Qatar’s finance minister and thanked the Gulf state for their support when Tunis was in drastic need for help when its economy was stumbling.
The visiting prime minister is concerned about the terrorist attacks in his country this year and the persistent threats. He said Tunisia counts on the implementation of the signed cooperation agreement in the security field while hoping that the two countries would coordinate their efforts to ensure security and stability in the region.
Sheikh Abdullah stated that the two states are determined to improve their ties and underlined the need for increasing coordination and consultation between them considering the changes and challenges that the Arab region has experienced. He reaffirmed his support to the democratic transition process in Tunisia and his commitment to strengthen economic partnership between the two countries in the development field.
Essid said the two countries have a “good and excellent” relationship and support Palestine’s struggle for an independent state while calling for an end to other regional conflicts.