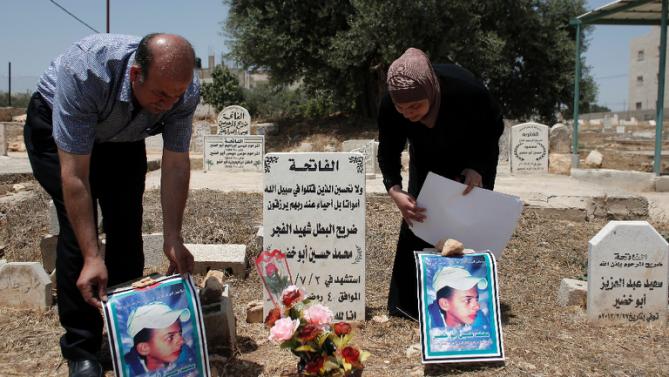 The court adjourned to December the case of the third suspect believed to be the ring leader of the group, 31years old Ben David, after claims of mental disorder thereby paving the way for arguments of irresponsibility of his actions during the killing. The three suspects confessed they committed the murder during interrogations.

Hussein Abu Khdeir, father of the deceased, alleged that the court is biased and behaves one way with Arabs and another way with Jews.” He called for the demolition of the houses of the convicts in reciprocity to actions taken against Palestinian attackers. He added that the mental health report submitted on Ben David’s behalf is a “trick” by the lawyer.

Muhammad Abu Khdeir was burnt alive by his murderers after he had beaten to unconsciousness. Israeli news website Ynet reported that the trio were shouting “this is for the Fogel family” and “this is for Gilad, Naphtali and Eyal” meaning that they were revenging the kidnapping and killing of three Israeli teenagers.

The two events eventually led to last year’s summer war between Israel and Hamas although the latter stated that it was neither involved in the kidnapping or killing of the Israeli teenagers. The hostilities led to the death of more than 2,200 Palestinians and around 70 Israelis. It also led to a breakdown of the talks between Palestinian and Israeli authorities.