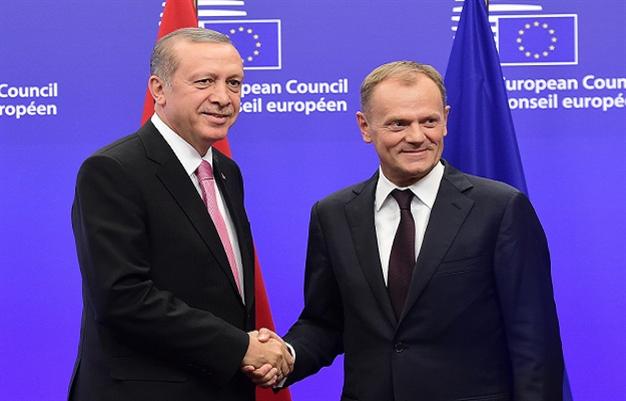 The European Union vowed to provide an initial €3 billion of additional resources to Turkey together with other incentives to help Ankara address the migration crisis.

The EU will provide immediate and continuous humanitarian assistance to Turkey and will also expand significantly its overall financial support, the European Commission said in a statement released Sunday after the meeting of heads of state or government with Turkey.

A Refugee Facility for Turkey was established by the Commission to coordinate and streamline actions financed in order to deliver efficient and complementary support to Syrians under temporary protection and host communities in Turkey. The EU is committed to provide an initial €3 billion, the statement said, adding that the need for and nature of this funding will be reviewed in the light of the developing situation. As Turkey hosts more than 2.2 million Syrians and as it has spent $8 billion, the EU thus underlined the importance of burden-sharing within the framework of Turkey-EU cooperation. In this context, they underlined the contribution by Member State and existing EU resettlement schemes and programs.

Turkey and the EU have decided to activate the Joint Action Plan that had been agreed until now ad referenda on 15 October 2015, to step up their cooperation for support of Syrians under temporary protection and migration management to address the crisis created by the situation in Syria. Results must be achieved in particular in stemming the influx of irregular migrants.

The EU and Turkey agreed to implement the Joint Action Plan which will bring order into migratory flows and help to stem irregular migration.

The meeting welcomed the intention of Turkey to adopt immediately measures to further improve the socio-economic situation of the Syrians under temporary protection. Both sides underlined their shared commitment to take decisive and swift action to enhance the fight against criminal smuggling networks.

Most of the refugees fleeing the Syrian war who arrive in Europe often depart from Turkey.

European Council President Donald Tusk said Turkey would be a major player but “not the only key to resolving the migration crisis” as he urged European countries to uphold their responsibility and duty to protect the external border. “We cannot outsource this obligation to any third country,” he said.

The Turkey-EU meeting also discussed the importance of overcoming the common challenges ahead and vowed to carry further their existing ties and solidarity and adopt result-oriented action to prepare their common future. The two sides reaffirmed that the fight against terrorism remains a priority and agreed to have regular Summits twice a year.

The weekend Turkey-EU summit was the first in 11 years. Turkey has been a candidate to the EU since 1999 and negotiating for accession since 2005.