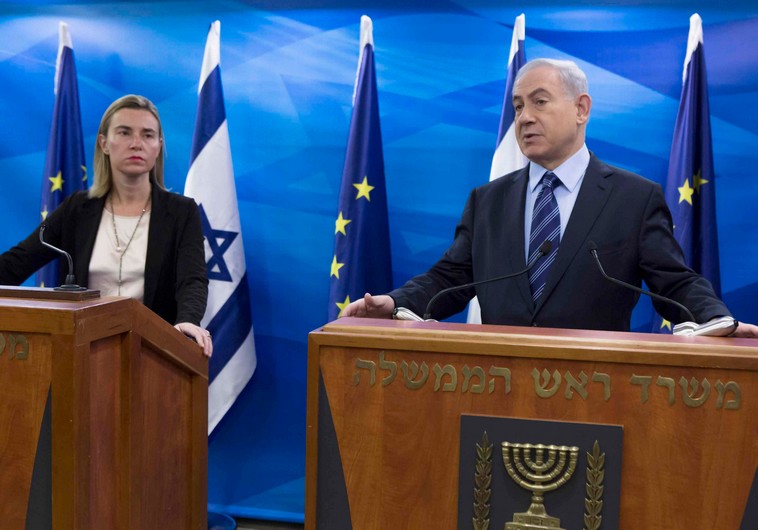 The Israeli government decided to suspend contacts with the European Union and its agencies on anything related to the Israeli-Palestinian peace talks in a retaliatory move to the EU’s decision concerning the labeling of products made in the occupied territories.

A foreign ministry statement said that Prime Minister Netanyahu, who also doubles as head of the ministry, ordered the “suspension of diplomatic contacts” on the peace talks pending “a reassessment of the involvement of EU bodies in everything that is connected to the diplomatic process with the Palestinians.”

The EU does not recognize East Jerusalem, the Golan Heights and the West Bank as part of Israel’s territory because they were seized after 1967 and therefore wants products originating from these areas not to be labeled ‘Made in Israel.’ The decision triggered the fury of Tel Aviv with Netanyahu claiming that it is an unacceptable discriminatory, hypocritical and a double standard decision.

The EU downplayed the move as a technical matter to clarify the origins of products.

Products made in the occupied areas will only be able to access the European market if labeled ‘made in settlements’ and Israel seems to be unwilling to abide by such guidelines, deeming they affect its claims of the territories.

The suspension of diplomatic contacts is however limited to the continental body as ties with member countries will continue on individual basis.

It is unclear how long the assessment will last and how effective the suspension will be because there are no ongoing talks between Israel and Palestinian authorities.

Britain, Belgium and Denmark had started affixing the labels to Israeli goods before the EU decision made on November 11.