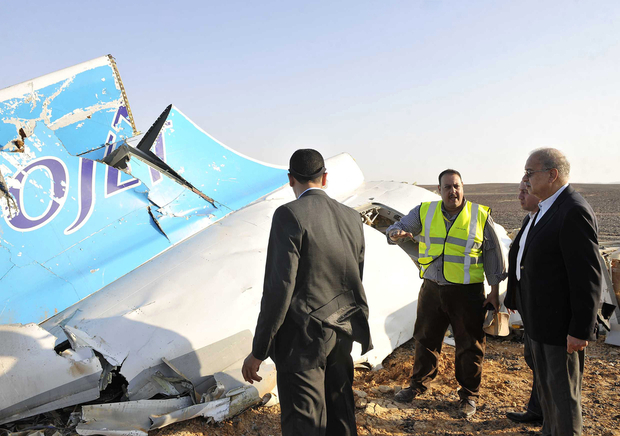 US President Barack Obama Thursday hinted to the possibility that a bomb might have caused the crash of the Russian passenger plane last Saturday in Sinai killing all 224 people on board.

“I think there is a possibility that there was a bomb on board and we are taking that very seriously,” Obama told a US radio station.

Obama’s comments strengthen British and US experts’ early version, although he said that it was too early to formalise the version, and that they have to wait for experts’ conclusion.

“We’re going to spend a lot of time just making sure our own investigators and own intelligence community find out what’s going on before we make any definitive pronouncements. But it’s certainly possible that there was a bomb on board.”

“Tentative” conclusion of some US officials and experts suggested that a bomb device was planted on the plane. Furthermore an American official told CNN network that “an employee at Sharm el-Sheikh airport may have helped to plant the bomb.”

“This airport has lax security. It is known for that,” the official said.

IS-affiliate militant movement in the Sinai claimed responsibility of the crash but refused to say how it succeeded in bringing down the aircraft which was flying high in the sky.

Russian and Egyptian authorities rejected the claims suggesting that a bomb or the IS downed the plane.

President al-Sissi dismissed the IS-led cause, while Russian President Vladimir Putin told British Prime Minister David Cameron over the phone that conclusion of the crash should be based on “ongoing official investigation.”

Bomb version of the crash has prompted several airlines including Air France, Belgian airline Jetair, Lufthansa and others to avoid the Sinai air space saying that they would only resume flights to Sharm el-Sheikh after they get details of the crash and conclusions of experts.

Egyptian authorities have lashed out at the airlines saying that they have established exceptional security measures to protect tourists and decision to avoid Sinai was irresponsible.

UK has begun evacuating the about 20,000 British tourists reportedly present at the Red Sea resort.