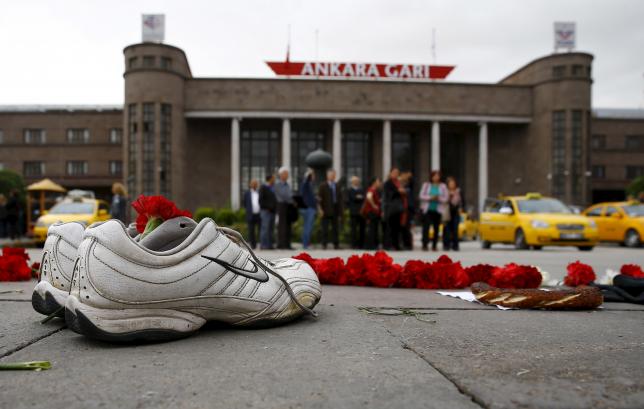 President Erdogan said the 10 October double suicide attack considered as the most deadly in the country’s history is “a completely collective act” carried out by the Kurdish militants, ISIS and the Syrian intelligence.

Erdogan made the claim in a speech broadcasted live on state TV during an annual meeting with a labor union in Ankara. Although he didn’t dwell on how the three groups collaborated, he accused them of carrying “this act all together” and left more than 100 people dead thereby showing “how terror is implemented collectively.”

Damascus has not reacted to the accusations. Evidence collected at the explosion site has shown that one of the bombers was a known Islamic State recruiter.

Murat Emir, a member of parliament for the main opposition CHP party, said the government is “confusing the situation with the PKK to avoid their own responsibility” because they don’t want the population to realize the way they have been ignoring the Islamic State.

Murat Gezici, chairman of a polling company, told Bloomberg that government’s focus on Kurdish separatists is beginning to raise suspicions as they try to discredit the main pro-Kurdish party, the HDP, by bringing “terrorism to the forefront… equating it with the PKK, and then finish it off.” He said the PKK is being used as “the culprit because there’s an election in front of us.”

The Ruling AK party has dominated Turkey’s political scene for the past 12 years with an absolute majority in the parliament but it failed to secure a similar result in this year’s parliamentary elections and negotiations to form a coalition government also failed. Elections will be held in November and observers believe that none of the parties would attain an absolute majority.