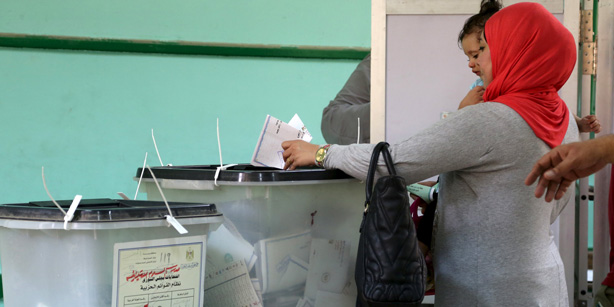 The head of the Supreme Elections Commission (SEC) Ayman Abbas announced that the participation rate in the first round of the parliamentary elections was at 26.55%, which is much lower than the rate scored during the 2011-12 parliamentary election held just months after the popular uprising that ousted long-time ruler Hosni Mubarak.

For the Love of Egypt party, a political alliance loyal to Egyptian President Abdel Fattah al-Sisi, dominated the polls, winning all the 60 list seats.

Only four of the 226 individual seats were filled. All the other 2544 candidates vying for these seats will have to contest in the run-offs on October 27 and 28 after they failed to obtain more than 50% of the valid votes in their respective constituencies.

Meanwhile, opposition parties are absent in these polls.

While the main opposition Muslim Brotherhood has been banned and declared a terrorist group, a list of socialist and liberal parties which would have therefore represented an alternative opposition withdrew, leaving free room to Love of Egypt which presented candidates in all the constituencies.

The parliamentary election is the last stage in the ‘roadmap to democracy’ after protests ended President Mubarak’s regime.