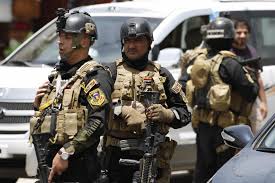 The Iraqi forces together with armed popular groups made territorial gains against ISIS in their quest to retake the provincial Anbar capital, Ramadi, with the help of the airstrikes of the U.S-led coalition.

Ramadi has been under the control of the extremists since May although the government had then claimed this control will last only a few days. After almost five months, ISIS is still resisting the government’s offensive that has registered very limited success.

Adhal Fahdawi, a member of the provincial council, said the main road west of Ramadi has been liberated as he hailed the coalition’s airstrike for playing “a big part in this progress.” He added that Ramadi will be liberated before November “if the (airstrike) operations continue at this pace.” Since the beginning of the month, 27 strikes have been carried out by the coalition. The government took over several neighbourhoods.

Colonel Steve Warren, the Baghdad-based spokesman for the coalition, said they are urging Iraqi military officials “to begin with the utmost haste to finish this fight in Ramadi” after being on combat “pause” for a while. “It’s a very important fight” that they should win, he said.

Improvised Explosive Devices have also slowed down the progress of the forces on the ground.

However, it seems as if Iraq is seeking more allies to help it battle ISIS. The head of Iraq’s Badr Organization Hadi al-Ameri said Baghdad has turned to Russia for help while the head of the parliament’s security and defence committee Hakim al-Zamili told reporters that “we might be obliged to request Russia to carry out air strikes in Iraq in the coming few days or weeks, but that will depend on Russia’s success in Syria” hinting that it might have a greater role than the U.S.