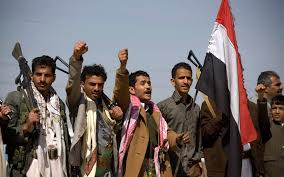 As the Hadi government tries to settle down in Aden awaiting the ousting of the Houthi forces from Sana’a, ISIS in Yemen launched four attacks on the Government’s headquarters at the al-Qasr Hotel as well as on the central operations headquarters of the Saudi and Emirati forces.

The four suicide attacks were described by the group as “a blessed operation facilitated by God.”

ISIS militants sided with the pro-Hadi militants to liberate Aden but residents have raised concerns over their activities in the city for the past weeks as they brandish their flags and parade freely. Those who carried out the attacks are said to be Yemeni citizens after the extremist group revealed their identities and photos. At least 15 coalition troops were killed including four Emirati soldiers and one from Saudi Arabia.

After the attack, Prime Minister Bahah convened a meeting of his cabinet, urging its members to do more to boost security.

According to Al-Arabiya TV, Bahah told the cabinet that the attack “does not affect anybody” but “binds us together more.” He however acknowledged that “there are security gaps” requiring more efforts.

Claims that the Houhtis were behind the attacks were refuted shortly after the explosions. Houthi official Yahya Ali Al-Qahoom Twitted that “the blows which the invaders have received in Aden signal the depth of the struggle going on among factions and the intelligence agencies of the aggressor countries.”

ISIS also targeted the Houthis in Sana’a with a suicide bomber detonating his explosives in a mosque killing at least 7 people.

This ISIS maiden attack on the coalition and the Hadi government hints that the Yemeni war will no longer be only about the Houthi Movement and their allies.