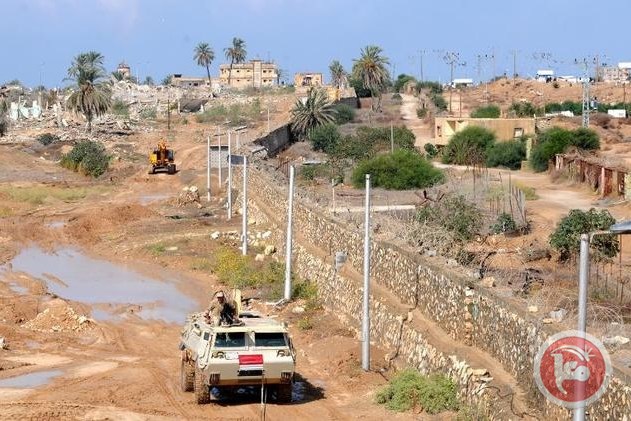 Egypt started filling the trenches that it dug along its border with the Gaza Strip with seawater last week and Hamas is urging Cairo to suspend its actions because of the dangers it poses.
Egypt started digging the trenches last year after declaring the border area as a buffer zone, part of its fight against terrorism. It later on cleared border residential areas in Rafah to set up a military-operated fish farm project that will also help shutdown smuggling tunnels.

Hamas spokesman Sami Abu Zuhri said on Sunday that they are “holding official contacts with Cairo to halt” the flooding of seawater into the trenches because it can affect Gaza’s underground water and render houses more fragile and prone to collapsing. He hoped that the Egyptian authorities will stop what he described as “rejected measures” that “represent a great danger” to Gaza.

Egypt considers the project as a security measure that will help it curb the smuggling of weapons through the tunnels as well as limit activities of militants in the Sinai Peninsula.

Zuhri also accused Palestinian President Mahmoud Abbas of instigating Cairo’s actions. He alleged that Abbas advised Egypt to carry out the measure, which is a “further evidence of the role of Mahmoud Abbas in the Gaza blockade” imposed by Israel since 2007.

The smuggling tunnels serve as a lifeline for Gaza because they have been used to convey the needed goods to the population since the introduction of the blockade. Supporters of the Egyptian measures say the tunnels were mainly used by militants to smuggle in weapons.

Egypt has not reacted to pleas from Gaza.

For the past two years, Egyptian authorities have been cracking down on smuggling tunnels along the border. Prices in Gaza skyrocketed because of the tight monitoring measures.