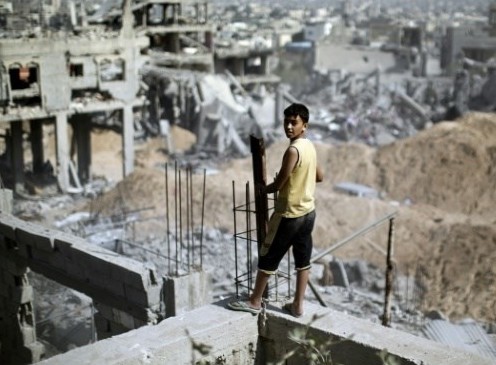 A new report released on Tuesday during the U.N. Conference on Trade and Development has warned that the Gaza strip would be “uninhabitable” before 2020 considering the economic prospects of the area.

The report signaled the alarming humanitarian crisis in Gaza especially after last year’s 50-day war between Hamas and Israel.

It highlighted that last year’s war “has effectively eliminated what was left of the middle class, sending almost all of the population into destitution and dependence on international humanitarian aid.” The situation is expected to worsen when Egypt completes digging trenches along the border in a bid to reinforce its security and end smuggling through trans-border underground tunnels.

Israel has imposed an economic blockade on Gaza since 2007 and strictly controls the movement of people and goods.

Hamas and Israel have fought three wars since 2009 but the 2014 war had had a huge negative impact on Gaza as it cut its gross domestic product by 15% and unemployment rose to 44% with 72% of the households facing food insecurity. Civilians in Gaza are living in ruined homes while some are still based in refugee camps.

The report summarized the 2015 economic prospects for the Palestinian territories as “bleak” because of the unstable political situation, reduced aid and the slow pace of reconstruction. It added that Gaza’s “de-development” instead of development could lead to it being “uninhabitable” in less than five years if the current economic trends continue because the war has paralyzed its exportation potentials and ability to supply the local market after interrupting reconstruction.

Meanwhile, Israel on Tuesday complained about Palestine’s attempt to fly the Palestinian flag at the United Nations headquarters, calling it “another cynical misuse of the UN by the Palestinian Authority.”