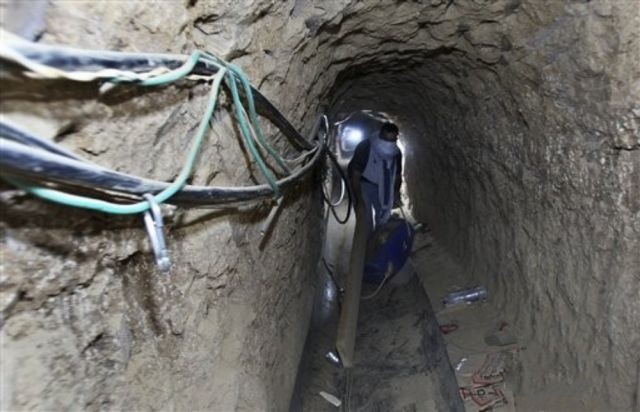 Egypt has accelerated the digging of tunnels along its border with Gaza, part of a military-operated fish farm project but authorities in Gaza are worried that it will affect their livelihood and further isolate the territory.

The tunnels being dug by the military will be filled with water as part of efforts to fight against militia operations and smuggling through cross-border underground tunnels.

The military tunnels have already had some effects as the price of smuggled goods in Gaza skyrocketed and smuggling has become very risky and expensive.

Some smugglers have installed water pumps in their tunnels in anticipation of them being flooded by the Egyptian water-filled tunnel that is yet to be completed.

Egypt could be preparing to fill the wells along the border with sea water after its military officials refuted the claims of Rafah’s mayor, Subhi Radwan of Hamas, that it would damage the water resources feeding Gaza and affect households depending on fishing. Radwan said Gaza already has “enough problems” endangering the lives of its people before he called on “our brothers in Egypt to stop the work.”

Cairo launched the project in November last year after 31 of its security personnel were killed in an attack on a checkpoint 30km away from Rafah. Its plans to establish a buffer zone at the border led to the demolition of homes and eviction of residents.

Hamas official, Mushir al-Masri, said the Egyptian operation is complimentary to Israel’s siege policy because it helps in the “tightening of the grip” on Gaza and urged Cairo not to “slide into this cliff that agrees with the Israeli policies of siege.”

An estimated 20 underground tunnels are operational but the numbers could further decrease.