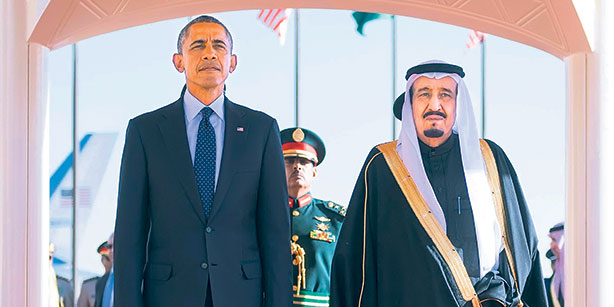 King Salman of Saudi Arabia will be making his first visit to the White House on September 4 at the invitation of President Obama to discuss high level issues related to the situation in the Middle East, Saudi and American diplomatic sources confirmed.

King Salman who boycotted few months ago Obama’s invitation to Gulf leaders to discuss the Iran nuclear deal process is expected in Washington on September 04 for a three-day visit.

According to Saudi foreign minister Adel Al-Jubeir, the Saudi King’s visit to the White House will allow the two leaders to dissipate clouds of doubt on relations between the two states and historical allies. Jubeir also indicated that talks between the two leaders will revolve around the crisis situations in Syria and Yemen as well as the Iran nuclear program deal signed last month, and the developments in the Middle East in general.

Since King Salman ascended the Throne, Saudi Arabia has emerged a leading Sunni power in the region to counter the growing influence of rival Iran in the region. Saudi Arabia is spearheading an international coalition pounding the Iran-backed rebel Houthis in Yemen.

“The president will host the king of Saudi Arabia at the White House on Friday, Sept. 4th,” Earnest said.

“His visit underscores the importance of the strategic partnership between the United States and Saudi Arabia,” he added.

The visit will strengthen ties between Saudi Arabia and the US and also allow Obama and his guest to discuss pressing and delicate Iran’s destabilizing influence in the region, Earnest said.

King Salman’s visit is coming as the US Republican dominated Congress is about to vote the historic Vienna pact signed between Iran and the World powers. Saudi Arabia and other Sunnite countries have been very wary about Obama’s diplomatic approach towards rogue Iran.

President Obama has sought to smooth their fears and promised American support in case Iran seeks to attack them.