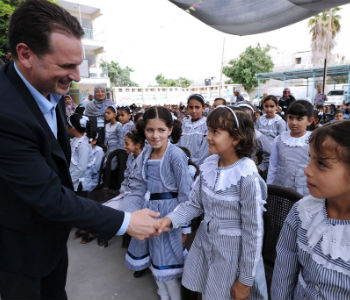 The Chief of UN Relief and Works Agency for Palestinians announced Wednesday Palestinian children in refugee camps will resume school as planned despite shortfall of the budget to meet the needs.

Pierre Krahenbuhl, head of the UN Relief and Works Agency for Palestinian refugees in the Middle East announced resumption of classes in Palestine and poor refugee camps hosting the Palestinian children the region.

“I am pleased to declare the 2015/16 UNRWA school year open. Students will return to school according to plan in Palestine on 24 August, in Jordan on 1 September, in Lebanon on 7 September and in Syria on 13 September,” Krahenbuhl said.

“Education is a fundamental right for children everywhere in the world, and it should never have come to the point where the UNRWA school year risked being delayed because of a funding shortfall for our core budget. But it almost did,” he said in a statement.

Thousands of Palestinian children have been without shelter and prevented from continuing school after the 50-day war between Hamas and Israel in 2014.

Promises for reconstruction of Gaza made at the Cairo conference last year failed. Only Saudi Arabia, Kuwait, the United Arab Emirates, and some western countries have heeded the call.

UN Chief Ban Ki-moon deplored earlier this month the fate of the refugees as he called for additional $100 million necessary to cushion the demands.

“The total amount of contributions received to date against the deficit… is $78.9 million,” Krahenbuhl said.

“While some significant work therefore remains, I consider that we have achieved our first objective and can open the schools.”

He thanked Saudi Arabia, Kuwait, the United Arab Emirates and United States as well as Switzerland, Britain, Norway, Sweden and Slovakia for taking the lead to save the Palestinian children.

Krahenbuhl indicated that the EU is also expected to lend a hand.

“In addition to this, we welcome the efforts by the European Union to mobilise additional means in few weeks and look forward to a positive decision,” he added.