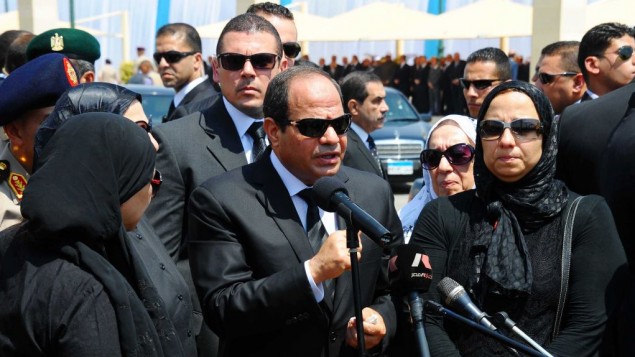 The anti-terror law, criticized in its initial form by journalists and lawmakers, was amended before it was ratified Sunday by the President. The ratified law imposes heavy fines ranging from a minimum 200,000 pounds (about $25,000) to a maximum of 500,000 pounds for anyone who publishes information contrary to the government’s version or spreads ‘false’ information on security attacks or operations on militants. Prison sentence for the “same offenses” has been removed.

The controversial anti-terror law was introduced following the death of Egyptian top prosecutor in a car bombing in June and the bloody clashes between Egyptian security forces and Islamist militants in North Sinai. Egyptian authorities fused after reports on the clashes said that militants killed dozens of security forces while the official statement put the number of deaths at only 21 soldiers.

Critics of the new law say the fine is too blown-up and maybe used by authorities to shut down small newspapers and outlets and prevent other larger ones from carrying out independent reporting on attacks or operations against militants.

Relations between Egyptian authorities and the media have worsened since the ouster of Islamist President Mohamed Morsi in July 2013 by the army. Egyptian authorities accuse media of taking the side of the militants and publishing false information. Some of Al-Jazeera TV network reporters have been indicted.

Last week Cairo slammed CNN TV network over its report on terrorism following the alleged beheading for a Croatian hostage by ISIS affiliated group in the Sinai. CNN said Cairo was doing poorly in the fight against terrorism and was economically unwell.

Egypt Foreign ministry slammed the report as unprofessional and misinforming.

Following the death of the Egyptian top prosecutor, President al-Sissi vowed to crush militancy, more concentrated in the Sinai. Militants have inflicted heavy losses to the Egyptian forces even though the authorities have stepped up security.

Militants are also targeting foreign representations. The Italian Consult in Cairo came under a car bombing attack which killed a passer-by. ISIS claimed responsibility of the attack. Another attack killed a security guard of the Niger embassy last month.