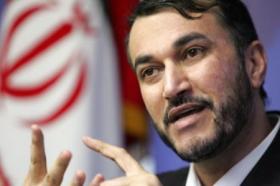 Feeling strengthened following the Vienna pact, Iran is planning to submit a roadmap to end the four-year old political crisis in ally Syria.

In an interview with the Beirut-based Al-Mayedeen television channel, Iranian deputy foreign minister Hossein Amir-Abdollahian said on Wednesday that his country will submit to the UN a plan considered as “one of the most effective and serious plans on the agenda of the United Nations and international players”

The new plan, drafted after “detailed consultations” between Teheran and Damascus, is a reviewed version of the Iranian initiative presented last year, Amir-Abdollahian said.

The Iranian official did not reveal details about the new proposal, but the Al-Mayedeen channel suggested that the new plan calls for an immediate ceasefire, the formation of a national unity government, constitutional amendments on minority rights and internationally supervised elections.

Amir-Abdollahian compared his country’s step to that of other actors in the Syrian crisis who opted, he said, for war from the start and who are not convinced that only political dialogue can help bring an end to the conflict.

Iran is a close ally of the Syrian Assad regime which has been challenged by giant gains scored by rebels and other extremist groups including al-Qaeda and ISIL.

Iranian Supreme Leader Ayatollah Ali Khamenei vowed to support the Syrian regime and other oppressed people in the region.

Furthermore, Syrian foreign Minister Walid Muallem recently hailed the accord between Iran and world powers and indicated that those who thought that after the nuclear accord Iran would let Syria down, were utterly wrong. He also had it that the pact will strengthen Iran and de facto its allies, suggesting the Assad regime.