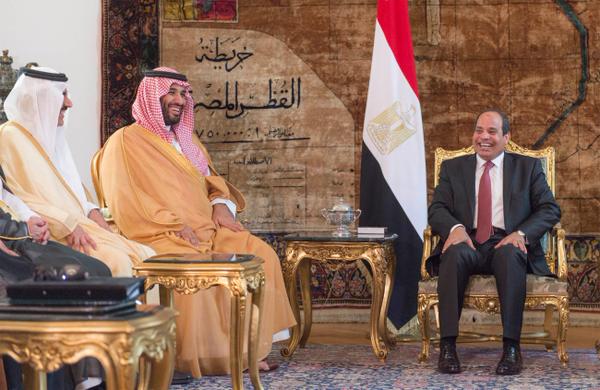 Saudi Defense Minister Mohammed Bin Salman’s one-day visit to Cairo ended with the Egyptian presidency announcing the adoption of the “Cairo Declaration” that is geared towards strengthening cooperation and boosting military, economic and investment ties between the two countries.

Under the six-point Declaration, the two counties are hoping to develop their military cooperation as part of efforts to establish a Joint Arab Force that was proposed during the latest Arab League summit in March. The force might include ground, aerial and naval forces in order to fight effectively against terrorism and extremism in the Arab World

Egypt and Saudi Arabia are also eyeing the improvement of their economic and investment cooperation in the fields of energy, electricity and transportation which will also help them to accelerate the economic integration between them. They are hoping that it will contribute towards making them a key focus of the World Trade movement.

Saudi Arabia has been supportive of the North African country, especially after the arrival of Abdel Fattah Al Sisi in power, with aids and grants worth billions of dollars.

The two countries which are aware that destabilization often discourages investments showed resolve to jointly counter the dangers of the current regional destabilization.

On a last note, they agreed to finally demarcate their maritime borders in the Red sea.