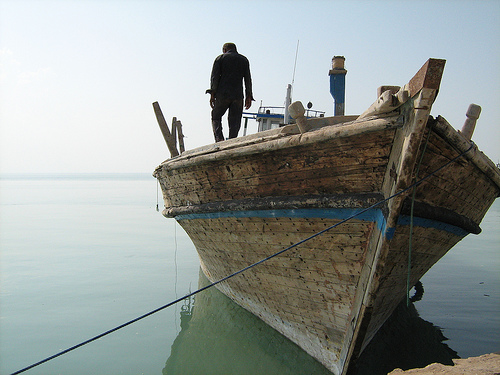 Bahrain seems to be running out of fish as its fishermen continue to cross into territorial waters of neighboring countries to fish especially when they have low catches.

President Jassim Al Jeran of the Professional Fishermen’s Society said that the number of Bahraini fishermen caught by Qatar in the past few years highlights that fish stocks in the seas around Bahrain are low.

Jeran noted that some fishermen “sail into the Gulf between Iran, the UAE and Qatar, which are international waters, and then they are arrested on their way back to Bahrain because the route back includes sailing through Qatar’s waters.” He explained that fishermen intentionally trespass maritime boundaries when their catches are poor.

Bahraini fishermen’s trespassing has been significant over the past few years forcing the Qatari interior ministry to issue a warning in August 2013 when the practice was at its peak with around 18 offenders being arrested weekly.

Jeran said that “sometimes fishermen think that coastguards won’t notice that they have crossed into another country’s territorial waters if they stay relatively close to the limits” even though during certain periods of the year, strong winds “can forcefully carry a boat without the fishermen’s intent” into neighboring waters.

He however pointed out that sanctions could only be decided by the authorities of the trespassed countries and the penalties depend on the intention to trespass and fish in foreign waters.

Most of the Bahraini fishing boats are now equipped with a GPS device and a radar to keep them within the seas of the country. It has helped to reduce the number of registered trespassed cases but the practice continues.