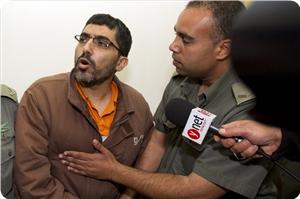 Dirar Abu Sisi, a Palestinian engineer from Gaza who once served as the director of the Gaza Strip’s power station before he disappeared in Ukraine during a visit and who later on surfaced in Israel has been sentenced to 21 years in  prison.

An amended indictment where he admitted the charges levied against him led to a plea bargain. An Israeli court in Beersheba convicted Sisi for committing several “crimes against the security of the state.”

In April 2011, Sisi was indicted with being a member of a “terror organization” and offering assistance to an “illegal organization” as well as the “production of illegal weaponry.” He denied the charges and Hamas also declared that he was not affiliated to the organization although the indictment stated that he was appointed by two most senior commanders  of Hamas to establish a military academy for hostile activity against the Jewish state after 2009’s Operation Cast Lead.

Sisi finally pleaded guilty to the charges and was described by the court ruling as “one of the top people involved in improving the destructive ability of Hamas’s munitions and rockets” with a“dominant” role in “facilitating Hamas’s ability to strike Israeli soldiers and civilians more effectively.”

Before his disappearance in Ukraine and appearance in Israel to face the charges, Dirar Abu Sisi is believed to have contributed to the production of both missiles and mortars, as well as increasing the range of rockets used by Hamas and produced in clandestine workshops. Rockets used by Hamas have a range of between 10 and 20 kilometers. Most of the rockets have been fired at southern Israel and are often filled with shrapnel including ball-bearings, razor blades, nails and glass due to their relatively small warhead.