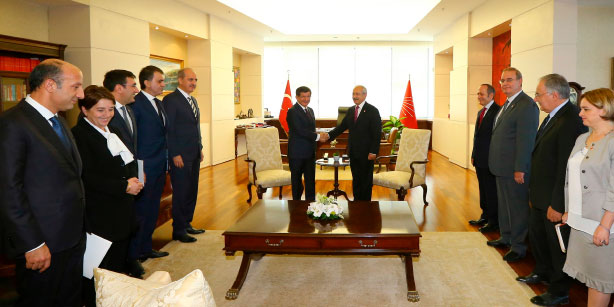 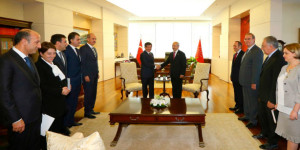 Turkish acting Prime Minister and leader of the AK Party led preliminary talks with main opposition Republican People’s Party (CHP) in an attempt to test water for the forming of a coalition government since the June 7 elections which left no party winner to form singlehandedly a government.

Ahmet Davutoğlu, leader of the Justice and Development Party (AK Party) who has been mandated by President Recep Tayyip Erdoğan to form a coalition cabinet received on Monday the leaders of the CHP secular party to discuss their intentions about participation in a coalition government.

The meeting, according to acting Prime Minister Davutoğlu, would allow the two parties to know each other and discuss base for a future coalition government.

The meeting which lasted for nearly two hours was deemed friendly and positive.

“Our talks with the CHP went positively in a warm atmosphere, Davutoğlu told a press meeting shortly after the meeting with CHP officials.

The preliminary meeting serves as a confidence-building measure between the two parties, as an expression of willingness to get involved in coalition talks, both Davutoğlu and Haluk Koç, the CHP spokesperson, told the media. The two parties agreed to continue talks to achieve a coalition.

Ahmet Davutoğlu will continue preliminary talks with other political parties on Tuesday and Wednesday. A meeting with Nationalist Movement Party (MHP) delegation is slated on Tuesday while talks with pro-Kurdish Peoples’ Democratic Party (HDP) will take place on Wednesday.

Ahmet Davutoğlu has 45 days to form a coalition government. If he fails President Erdogan will give CHP leader the mandate.