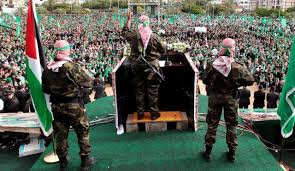 The one year anniversary of the 50-day summer war between Hamas and Israel was an opportunity for a show of force for the al-Qassam Brigades as they showcased two new missile models that they claim were made locally. The commemoration began in the evening at thecentral Gaza City square after the traditional fast-breaking meal and hundreds of people were in attendance.

Hamas Spokesman Abu Obeida told the gathering that the two new missiles represented a“qualitative leap” forward. The missiles are about three to four meters long and were on the back of a military truck. Their details were not revealed. Militants who were at the gathering had their faces covered in red keffiyeh.

Prime Minister Netanyahu warned “all enemies of Israel- Hamas, Hezbollah, Iran and IS (the Islamic State group) – that those who attempt to attack our people will pay with their blood”during a similar anniversary celebration at the beginning of the week.

There have been threatening speeches from opposite sides but observers believe that none of them are interested in renewing their hostilities any time soon. Israel’s President Rivlin has stated that the military operation was incomplete until Israel finds its two soldiers reported missing during the war.

Gaza is lying in ruins after the war and a U.N official on Wednesday called for an end to the“inexcusable” Israeli blockade of the territory that has helped prevent rebuilding. Robert Turner, operations director in Gaza for UN relief agency UNRWA, said the blockade has an undeniable “crippling effect.”

Israel claims that the blockade is necessary for security reasons. A panel of senior Israeli Defense Forces officers has lately recommended a partial lifting of the blockade with increased freedom of movement to stimulate Gaza’s economy.