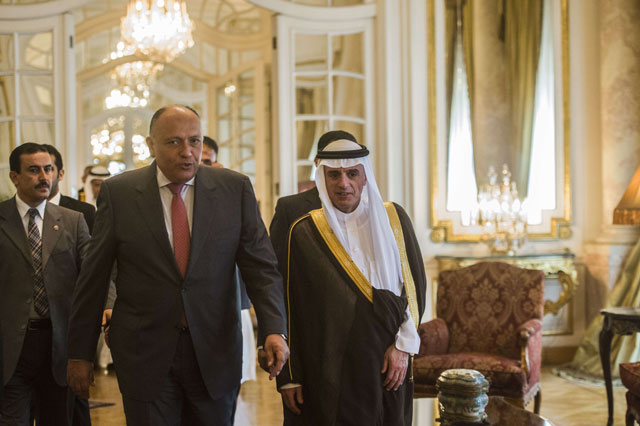 Saudi Arabia and Egypt have re-affirmed their coordination and determination in the fight against terrorism and their firm position against Iran’s influence in the region, and in Yemen in particular.

The stand was reaffirmed at a joint press conference held in Cairo on Sunday by the two countries Foreign Ministers.

“We have a common vision on how to deal with the situation in Yemen,” said Egyptian Foreign Minister Sameh Shoukri.

“Our positions are identical, the work is done through close co-ordination at all levels,” he added.

Saudi Arabia has been leading a military coalition against Houthi insurgents in Yemen, believed to be sponsored by Iran.

The Saudi foreign minister and former ambassador to Washington Adel Al-Jubeir criticized Iran’s destabilizing influence in the region and its backing to the Houthi rebels who still gain ground in the war torn poorest Arab country despite months of air-strikes.

“We reject the actions of Iran… and Iran’s support for terrorism,” said Jubeir

Iran “is the only state that interferes in the affairs of the region, whether in Lebanon or Syria or Iraq or Yemen,” he added.

The Egyptian foreign minister last week said Egypt examined the possibility to send troops to Yemen but reverted as the current situation did not dictate such a decision yet. Egypt is closely following all developments, he had said.