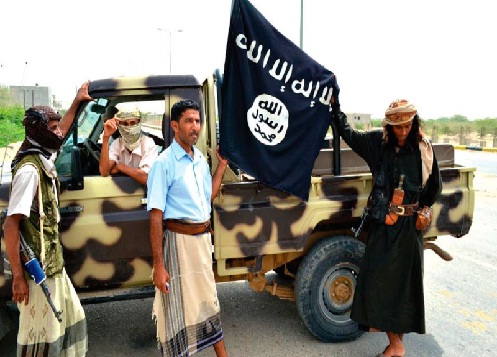 The crises in Yemen is slowly becoming a triangular affair after militants of Al-Qaeda in the Arabian Peninsula (AQAP) took over large parts of Mukalla, the capital of Hadramawt province in southeastern Yemen and declared a Jihad; a holy war. They have set up road blocks and are also patrolling the capital. Al-Qaeda took over parts of Mukalla after freeing 300 inmates in a jailbreak in the city on Thursday and among those freed were Senior Al-Qaeda figure Khalid Batarfi, according to security officials.

Residents in Mukalla said the whole capital has not fallen to AQAP because key infrastructures such as army camps, the airport and the port are still being controlled by government forces. It is unclear if the al-Qaeda militants will launch an offensive on government controlled areas after declaring “Jihad against Shiites” from the loudspeakers of mosques controlled by them, residents stated. Their call for jihad against Shiites was making reference of the Houthi Movement formed by Shiites.

Officials have stated that Al-Qaeda gunmen also attacked the local administration complex, a branch of the central bank and the police headquarters.

Saudi Arabia has not reacted to the developments although it is leading the Arab coalition that is carrying out airstrikes on the Houthis and their allies who have seized large parts of the country including the capital Sanaa.

There have been reports that al-Qaeda could soon be dissolving to allow its members to join the Islamic State although observers have warned that AQAP known as al-Qaeda’s deadliest group could exploit the chaos in Yemen to expand its domination.

Henceforth, it seems like the Saudi-led coalition will not only battle the Houthis to reinstate Hadi but also AQAP if the group should ever become a major player threatening such a move.