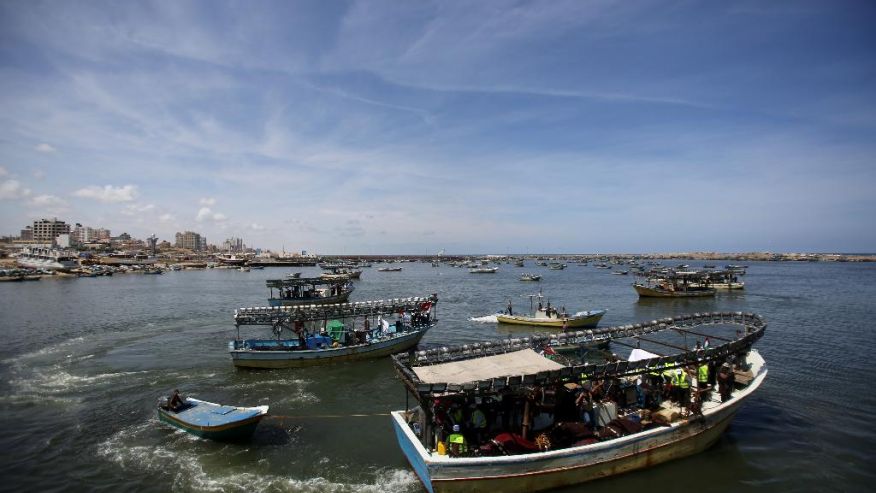 As the Israelis and Palestinians resumed indirect talks in Cairo on Monday in a bid to establish a lasting truce, press reports indicated that Hamas, the Islamist militant movement ruling the Gaza Strip, has drawn a list of requirements in exchange for the suspension of armed resistance against Israel, including the reopening of the Yasser Arafat International Airport and the building of a seaport.

These two requirements seemingly came on top of the list as the inhabitants of Gaza are seriously affected by the blockade imposed on their territory and want connections with the outside world.

The Gaza International Airport was designed and built by Moroccan architects, during the reign of the late King Hassan II, as a gift to Palestine after the conclusion of the first peace agreement with Israel in 1994 and the recovery of Gaza and Jericho territories by the Palestinians.

The airport construction worth some $ 86 million was co-funded by Japan, Saudi Arabia, Spain and Germany.

The airport became operational in 1998 to the delight of Gaza inhabitants but was closed to traffic in 2001 after major equipment and facilities were destroyed by Israeli raids. The airport which has been shelled many times afterwards is today falling into ruins.

According to the widely circulated American newspaper, The Washington Post, Hamas negotiators have put the reopening of the Gaza airport on the top of their list of demands to put an end to the isolation of the territory.

The daily which underlined that the Palestinian negotiators “want movement between their seaside territory and the outside world” said the Palestinians want also to revive the project to build a port that was stopped by Israel years ago.

According to press reports, Turkey and Norway are willing to build and operate a seaport in Gaza.

Meanwhile, Israeli Prime Minister Benjamin Netanyahu insists that any rehabilitation move must be closely associated with the demilitarization of the Strip.

In this vein, Germany, France and Britain Last week proposed to rehabilitate the Gaza Strip in cooperation with the Palestinian Authority and the international community and at the same time prevent the rearmament of Hamas and other terror groups in the Strip as requested by Israel.

The three European countries also proposed the establishment of an international mechanism to prevent the entry of prohibited materials to Gaza.

Also, a donor conference for the reconstruction of Gaza will be held in Egypt early September, at the initiative of Norway.

The airstrikes and ground offensive against Gaza left nearly 2,000 Palestinians dead and many civilian buildings and facilities destroyed. According to the UN, about 73 percent of the people killed were civilians. On the Israeli side, the death toll was 67.