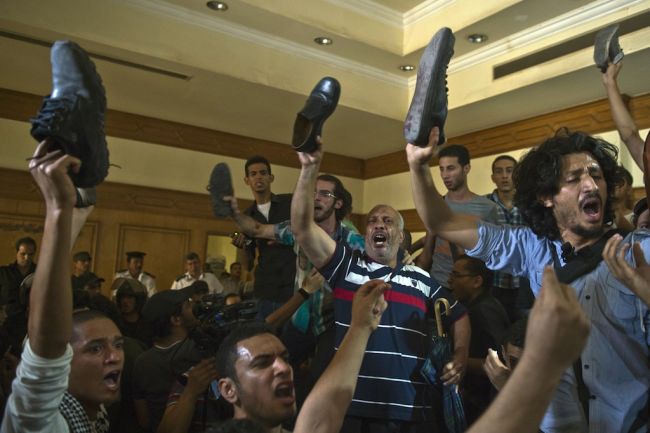 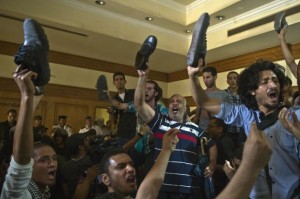 The guilty verdicts and sentences handed down by an Egyptian court against  several workers for non-government organizations have prompted anger and outrage both in Washington and Brussels, and may result in diplomatic crisis.
The U.S. administration and European governments have slammed the trial and accused the new Islamist authorities in Egypt (controlled by the Muslim Brotherhood) of trying to suffocate freedom voices and undermine democratic transition in the country.
In all, 43 NGO workers, including several Americans and other foreigners, were accused of receiving illegal foreign funding but they denied any wrongdoing.
The court sentenced 27 NGO workers in absentia to five-year sentences; 11 defendants to one-year suspended jail sentences; and five others to two-year sentences that were not suspended. Most of the 16 Americans who would have been affected by the verdicts had left the country months ago, after paying each $ 132 000 in bail. Among the Americans sentenced in absentia include the son of U.S. Transportation Secretary Ray LaHood. The only American who stayed in Egypt to challenge and stand the trial is Robert Becker, a former NDI employee, along with one German and 13 Egyptians.
The Egyptian court ordered the closure of the offices of the NGOs involved in the case, including the U.S.-based International Republican Institute (IRI), National Democratic Institute (NDI) and Freedom House.
The case goes back to December 2011 when the Egyptian authorities raided the offices of 10 NGOs, saying the raids were part of an investigation into allegations that the groups received illegal foreign financing and were operating without proper licenses.
According to Egyptian officials, the NGOs’ work contributed to international interference that was inciting continued protests against the government.
“The United States is deeply concerned by the guilty verdicts and sentences, including the suspended sentences, handed down by an Egyptian court against 43 NGO representatives in what was a politically-motivated trial”, said Secretary of State, John Kerry, in a statement released by the State Department.
“This decision runs contrary to the universal principle of freedom of association and is incompatible with the transition to democracy”, Mr. Kerry said, stressing the court’s ruling to close these organizations’ offices and seize their assets “contradicts the Government of Egypt’s commitments to support the role of civil society as a fundamental actor in a democracy and contributor to development, especially at this critical stage in the Egyptian people’s democratic transition”.
For the top US diplomat, civic groups and international NGOs “play a legitimate role in any democracy and are critical to advancing freedoms, supporting universal human rights, giving voice to citizens’ views, and acting as appropriate checks on the government”. He urged the Egyptian government “to work with civic groups as they respond to the Egyptian people’s aspirations for democracy as guaranteed in Egypt’s new constitution”.
The National Democratic Institute (NDI) said it was “shocked and deeply distressed” by the verdicts. The International Republican Institute decried the trial saying it was a “politically motivated effort to squash Egypt’s growing civil society.”
The Washington-based Middle East Institute (MEI) also condemned the verdicts, including the five-year sentence handed down for Charles Dunne, an MEI scholar and director of Freedom House’s Middle East and North Africa programs.
In Brussels, EU High Representative for Foreign Affairs, Catherine Ashton and Commissioner Stefan Füle issued a joint statement expressing concern over the sentencing of NGOS workers in Egypt.
“This verdict conveys a negative signal regarding the work of civil society”, they have said, underlining “the crucial role civil society has to play in Egypt’s on-going democratic transition”.
They have also urged President Mohamed Mursi’s government to allow civil society operate freely, noting that “the EU has been working actively with Egyptian civil society and has developed several highly successful projects which promote universal human rights.
According to some political analysts, the convictions of representatives of NGOs are a serious setback for civil society in Egypt, a move that may strain further relations between the Islamist government and the West, already distrusting each, instead of seeking to build up mutual confidence for a better shared future.