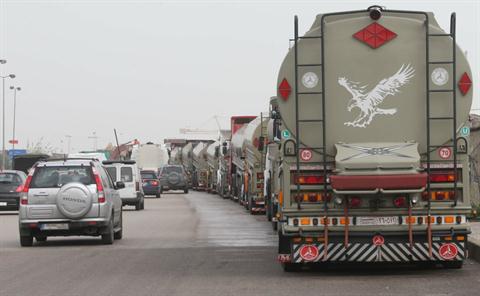 Gasoil re-exporting to Syria from Lebanon is undergoing a major setback with only one dealer remaining in the business, conducted under a dangerous atmosphere and also being discouraged by bank policies.  Lebanon’s trade deficit confirmed the trend. Interestingly, the quantities of gasoline and gasoil from Syria are increasing in Lebanon and officials believe that smugglers are responsible.
The decline of re-exportation to Syria is paving the way for the black market’s domination of supply to the country, as fuel imports during the first quarter of this year have dropped by 33%, according to Lebanese customs data. The General Manager of Wardieh Holdings Incorporation, Dania Nakad, has also confirmed the decline. He said the  “strong pressure placed by Lebanese banks, dropping margins of profits and higher risks all combined to making the trade fall out of favor.”
The continued stagnation of the Lebanese economy has also contributed to the fall in imports. 13% is accounted to it but a chief economist at Byblos Bank, Nassib Ghobril, said the sharp decline in fuel imports does not justify the difference in local consumption, even when the number of tourists, which has also declined, is taken into consideration. Concerns have been raised about the growing amount of smuggled Syrian fuel into Lebanon. General Manager Nakad claimed that it’s available all over the country. He pointed out that the Syrian gasoline subsidies continue to make the illegal trade very lucrative.
Last year, Syria was heavily dependent on Lebanese fuel imports due to economic sanctions. This year, it has given the green light to private companies to import fuel from the country, but protesters have been blocking roads and torching Syrian fuel tanks. Damascus reacted by refusing access to Lebanese trucks on its land for more than a month.