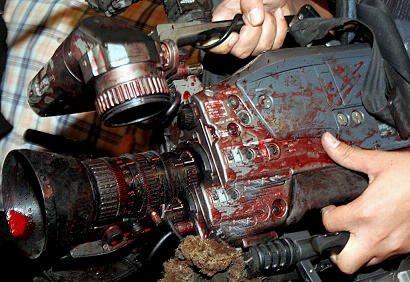 Foreign journalists are finding it more and more dangerous to do their work freely in Iraq because of continuing instability in the Middle Eastern country. A week ago a French-Australian journalist was arrested by Iraqi government security forces for taking photographs in restricted areas. Nadir Dendoune who works for the French “Le Monde Diplomatique” is being accused of penetrating and taking pictures of southern Dora district in Baghdad that has been under strict surveillance for the last few months.
The Iraq police report states that the journalist’s detention was justified since he didn’t have the mandatory government authorizations.
This reporter who has an Australian and an Algerian passport was forced  to give all his documents to the authorities and is kept under custody. A statement recently released claimed that the prisoner was being well treated and in excellent health condition.
This breach to freedom of the press in the country was denounced by many local and international journalist associations as well as freedom activists that demanded Dendoune’s immediate release. In this vein, the Iraqi journalists’ association is endeavouring to spread the news about what it calls “the unjust detention” of the foreign reporter. According to the association’s spokesman Sherif Mansour, the government’s harassment of the press reminds of the Saddam Hussein era. He said the unclear media laws enforced in Iraq in 2011 are hampering the right to information which is contrary to democracy.
Meanwhile, the new York-based Committee to Protect Journalists (CPJ) is trying to provide all the legal help the foreign reporter might need to get his freedom back.