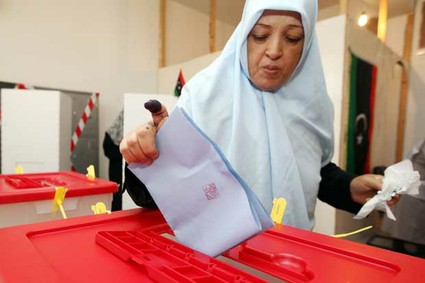 Libya’s first elections polls after the Ghadafi regime is being led by the National Forces Alliance with more than 70% of the votes counted. Out of the 200 parliamentary seats, 120 are being contested by individual candidates while the rest is up for grabs between the political parties.
The National Forces Alliance (NFA), a liberal coalition of which by wartime premier Mahmoud Jibril is a member, has already set a large margin with its closest competitor, Justice and Construction Party, as the counting continues but these results are less significant because a large chunk of the parliament will be composed of independent candidates. Acquisition of parliamentary seats is decided proportionally.
Mahmoud Jibril is seen as the next president if the constitution which is to be drafted next year creates such a position.
The Justice and Construction Party (JCP), Libya’s Muslim Brotherhood, was favored to be the top runner in the elections following the triumph of its homologues, the Islamists, in the Maghreb but some of its strongholds voted for the NFA. JCP is already considering a coalition in order to be a strong bloc in the parliament as its leader, Mohammed Sawan, revealed that they “have been in contact with around 10 parties about this” and some individual candidates. He claimed that Libyans were out-smarted because “most people thought Jibril was running as a candidate himself because his picture was on so many posters. Now they find out that he is not, they are starting to regret their votes.”
Final official results can only be available next week. The elected parliament will choose a prime minister before preparing for elections next year.