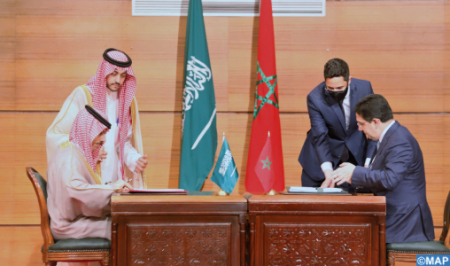 Morocco reiterated its absolute solidarity with Saudi Arabia and its constant support for all measures taken by the Gulf Kingdom to protect its security and stability as well as the safety of its territories, citizens and residents.

According to the minutes of the 13th session of the Morocco-Saudi Arabia Joint Commission convened in Rabat, under the co-chairmanship of foreign ministers Nasser Bourita and Prince Faisal bin Farhan Al-Saoud, the Moroccan side “reiterates its absolute solidarity with the brotherly Kingdom of Saudi Arabia, and its continued support for all measures that the country is taking to protect its security, stability and safety of its territories, its citizens and residents.

The Morocco-Saudi Arabia Joint Commission condemned the launch of Iranian-made ballistic missiles from Yemen’s territory, as well as drones launched against vital and civilian facilities in the Kingdom of Saudi Arabia and the brotherly State of the United Arab Emirates.

Saudi Arabia on its part reiterated its firm supportive stand to Morocco’s territorial integrity and sovereignty over its Sahara and voiced strong backing to the autonomy plan offered by Morocco to the Sahara under its sovereignty, describing the Moroccan proposition as a realistic and pragmatic political solution in line with international law and the resolutions of the Security Council and the UN General Assembly.

The commission, which discussed Arab, Islamic and international issues, expressed “satisfaction” at the convergence of views of both countries in this regard, stressing the need for coordination and continuous consultation to ensure the common interests of both countries and address the challenges of Arab and Islamic nations in light of the rapid changes on the international scene.

The committee stressed the importance of joint Arab action allowing Arab countries to defend their unity and sovereignty and strengthen their security and stability by defending the values of solidarity and neighborliness and refraining from interfering in the internal affairs of states and threatening their territorial integrity.

The commission also expressed hope that the crises suffered by the brotherly Arab countries, such as Syria, Yemen and Libya, will be resolved through a political solution that preserves their territorial and national unity, guarantees their security and stability and meets the aspirations of their peoples to development and freedom, in line with United Nations resolutions.

Morocco has also welcomed the Saudi initiatives to bring peace to sisterly Yemen.