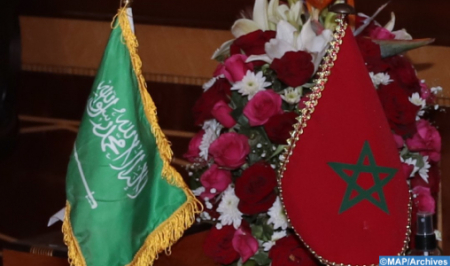 Saudi trade minister Majid ben Abdullah Al Qasabi has voiced his country’s intention to increase the number of Moroccan workers from 22,000 to nearly 500,000 within the frame of its new investment strategy focusing on human capital.

During his meeting held Monday in Jeddah with Moroccan peer Ryad Mezzour, Al Qasabi said Saudi Arabia is determined to strengthen further economic & trade relations with Morocco, stressing the need to enhance contacts between the two countries private sectors and work hand in hand for joint access to emerging markets.

Al Qasabi also called for increasing the Moroccan and Saudi investments injected in both countries for shared dividends, development and prosperity.

For his part, Mezzour said Morocco offers huge investment opportunities thanks to its geographical position, skilled labor force and FTAs signed with the European Union, the United States and several Arab countries.
He called for setting up a Saudi-Moroccan maritime line to give new momentum to trade exchanges between the two countries and overcome all logistic hurdles.

Ryad Mezzour, who led the Moroccan delegation to the Moroccan-Saudi Business Forum held Monday in Jeddah, urged economic stakeholders in the two countries to increase efforts in order to build effective strategic partnerships, through better exploitation of the industrial complementarity between the two countries and the enormous potential offered within the framework of a win-win relationship for both sides, while taking into account mutual interests.

He voiced “the Moroccan government’s full support for the objectives of this partnership, as well as the particular interest it takes in its development so as to meet the expectations of the two peoples.”

Morocco and Saudi Arabia also agreed to draw a roadmap for the creation of an integrated industrial system to increase investment opportunities and promote employment between the two kingdoms.

This came during a meeting Mezzour held with Saudi Minister of Industry and Mineral Resources, Bandar bin Ibrahim Al-Khorayef.