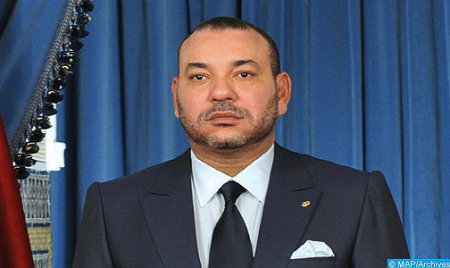 King Mohammed VI of Morocco has vehemently condemned the repeated attacks on Saudi oil storage facilities as subversive and terrorist acts against vital and civilian facilities in Saudi Arabia.

This came in a message of solidarity king Mohammed VI addressed to the Custodian of the Two Holy Mosques, King Salman bin Abdulaziz Al Saud, following the despicable and repeated attacks against vital and civilian facilities in Saudi Arabia.

In this message, the King affirms that he has followed, with strong condemnation, the news of the despicable and repeated attacks which target vital and civilian facilities in Saudi Arabia.

The Sovereign, who strongly condemns these cowardly subversive and terrorist acts, reiterates the full solidarity of the Kingdom of Morocco with this brotherly country, stressing that he stands permanently by its side to face these abject attempts which do not only constitute an attack to the security of its territories and its citizens, but also a threat to energy security and supply in the world.

The Saudi energy ministry said Saudi Arabia strongly condemned the “sabotage attacks”, reiterating that it would not bear responsibility for any global oil supply disruptions resulting from such attacks.

The ministry slammed Iran for continuing to arm the Houthis with ballistic missiles and advanced drones, stressing that the attacks “would lead to impacting the Kingdom’s production capacity and its ability to fulfil its obligations to global markets”.

Gulf and Arab countries, the Arab League, the OIC as well as Washington and several other capitals from around the world have all condemned this week’s multiple Houthi terrorist attacks on Saudi Arabia, including the latest one that struck an Aramco facility in Jeddah, which is clearly civilian infrastructure.

The attacks threaten the security of oil supplies, which have been under pressure globally because of the fallout of the Russia-Ukraine war.