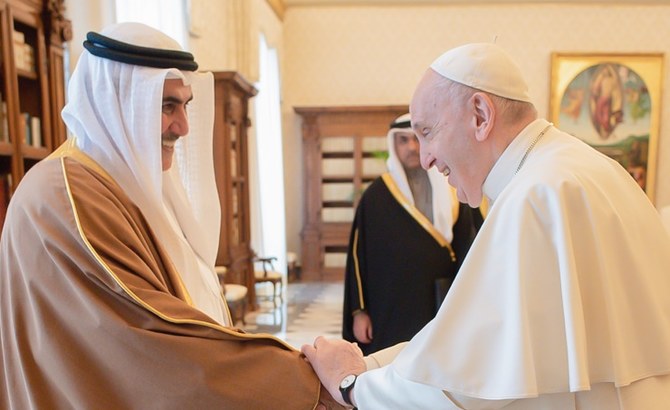 King Hamad of Bahrain has handed an invitation letter to Pope Francis to visit the Gulf country, Arab News reports citing the State news agency of kingdom, BNA.
The invitation, Saudi media notes, was delivered by Sheikh Khalid bin Ahmed bin Mohammed, the king’s adviser for diplomatic affairs, during a meeting with the pope at the Vatican.
Sheikh Khalid expressed King Hamad’s appreciation for the pontiff’s “pivotal and prominent role in establishing and strengthening interfaith dialogue and understanding between different cultures and civilizations, and spreading the values of human brotherhood and coexistence among all” according to BNA.
The Bahraini official reportedly reiterated the king’s support for the Document on Human Fraternity for World Peace and Living Together, also known as the Abu Dhabi declaration, and the importance of building on it to ensure a more prosperous future for all of humanity.
The declaration was signed in 2019 between Pope Francis on behalf of the Roman Catholic Church, and the grand imam of Egypt’s Al-Azhar in 2019 in the UAE. The leader of the Catholic church made a historic visit to Gulf peninsula in 2019.