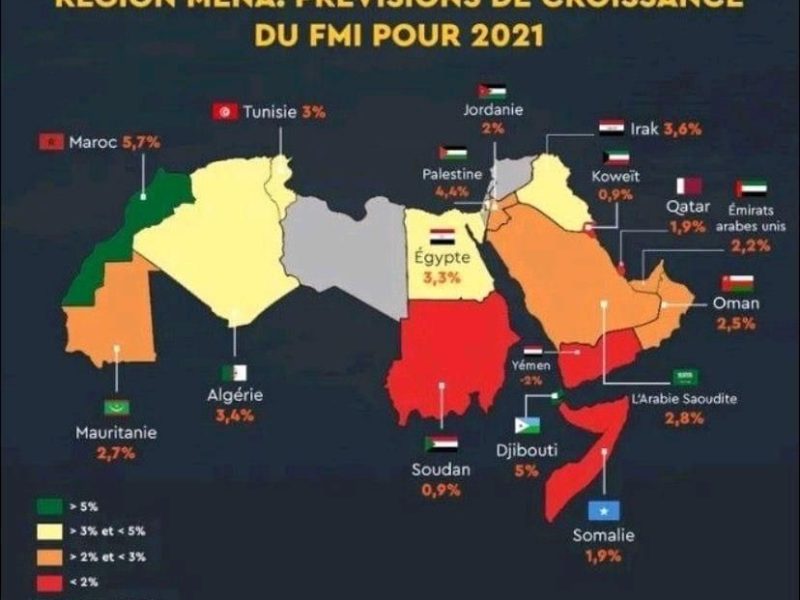 The International Monetary Fund (IMF) on Tuesday announced new forecasts for Moroccan economy in 2021 that revised upward growth rate to 5.7% against the 4.5% revealed in April.

This is one of the most robust growth rates in the Middle East & North Africa region as the world tries to gradually recover from the effects of the Covid-19 pandemic.

The IMF’s forecasts are however slightly lower than those of Morocco’s Central Bank, which expects the economy to rebound to 6.2%, thanks to a revival in economic activity.

The Central bank had previously forecast the economy to grow by 5.8% after it contracted 6.3% last year under the double impact of Covid-19 and drought.

But, a recovery of agricultural production by 18.5% thanks in part to a jump in cereals production to 10.3 million tons as well as the return of tourism and economic activity has bolstered Morocco’s growth prospect.

Morocco’s growth outlook for 2021 is one of the highest in the region thanks to forward-looking measures taken by the government, under the leadership of King Mohammed VI, to shore up the economy by unlocking state spending and assistance to struggling enterprises and promoting entrepreneurship and safety-nets.

The economic rebound also came on the back of an uninterrupted and steady vaccination campaign. So far, Morocco tops African countries in terms of administered doses. It has administered 44 million doses.

King Mohammed VI has in a speech last Friday underscored the resilience of Morocco’s economy and asked the government to promote public investments and press ahead with the new development model.

In its report entitled “World Economic Outlook”, made public on Tuesday, October 12, 2021, at the Autumn Meetings of the Bretton Woods institutions, the IMF now expects Morocco’s growth rate for the year 2021 to reach 5.7%, while previous projections for the country were estimated at 4.5 pc. This is 1.3 points higher than the forecast rate forecast last April by the international financial institution.

The Bretton Woods institution points out, on the other hand, that unemployment should climb to 12% in 2021 before falling slightly to 11.5 next year.

At the global level, the international institution has slightly lowered its growth projections, now counting on 5.9% this year and 4.9% in 2022, while noting the persistence in the short term of the repercussions of the pandemic and its divergent effects.