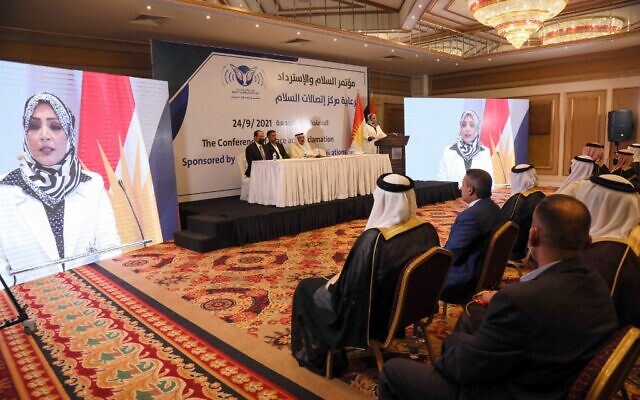 The Iraqi judiciary has moved to arrest a group of people for attending a conference advocating the normalization of ties between Bagdad and Tel Aviv.

Arrest warrants were issued against the head of the Sunni Awakening Movement, Wissam al-Hadran, former lawmaker Mithal al-Alosi and Sahar Karim al-Taie, an employee at the Ministry of Culture, the Iraqi Supreme Judicial Council reportedly said in a statement.

Other participants are reportedly also facing demand for arrest.

The accused, Sunni and Shia tribal figures, attended Friday a peace conference in Iraqi Kurdistan’s capital of Erbil in northern Iraq, that called for establishing relations between Iraq and Israel. The gathering was organized by the Center for Peace Communications, a New York-based nonprofit that seeks to advance closer ties between Israelis and the Arab world.

“We are a gathering of Sunnis and Shias, comprising members of the Sunni Awakening Movement of the Sons of Iraq, as well as intellectuals, tribal leaders, and active youth from the protest movement of 2019-2021. We call for Iraq to enter into relations with Israel and its people through agreements similar to the Arab countries that have normalized,” a statement by the conference participants said.

Iraq and Israel have no diplomatic relations and the anti-Israeli sentiment is wide spread in the Middle East country. Iraqi law continues to issue strict penalties to citizens and residents who maintain contact with Israelis.

The Friday conference comes amid a change of policy by many countries in the region towards Israel.