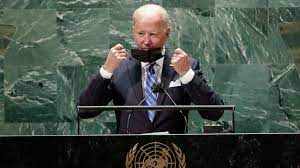 US President Joe Biden backed the two-state solution during his speech at the 76th UN General Assembly, insisting that a sovereign and democratic Palestinian state is the “best way” to ensure the Jewish state’s future.

“We must seek a future of greater peace and security for all people of the Middle East,” Biden said in a speech to the U.N. General Assembly.

“The commitment of the United States to Israel’s security is without question and our support for an independent Jewish state is unequivocal,” he said.

“But I continue to believe that a two-state solution is the best way to ensure Israel’s future as a Jewish democratic state, living in peace alongside a viable, sovereign and democratic Palestinian state,” he said.