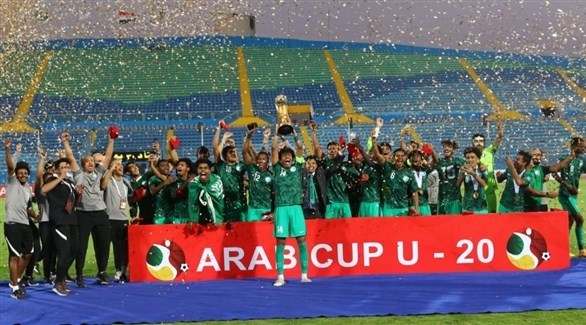 Saudi Arabia’s U-20 team won Tuesday the 2021 Arab Cup of the category after beating Algeria 2-1.
The Saudi team came out first with six points from the group stage that included fixtures with Uzbekistan (2-0), Yemen (2-1) and Tunisia (1-2).
The young Green Falcons advanced to the quarter finals to axe Senegal in a penalty shootout.
In the semifinals, the Saudi team got rid of tournament hosts Egypt, 2-1, to head to the final against Algeria.
The Tuesday final at Cairo International Stadium is the third in a decade by for the young Green Falcons after two failures in a decade, in 2011 and 2012, Arab News reports.
The Gulf country, a power house in the region in the area of football, boasts an impressive achievement with U-20 team category at the international level.
The Arab country won the AFC U-20 Asian Cup three times (1986, 1992, 2018), finishing runner-up on two occasions, and third in the championship twice. It also claimed the Gulf Cup in 2016.