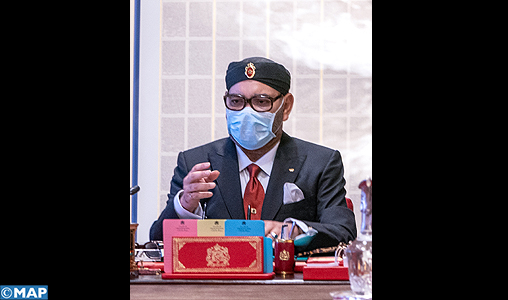 King Mohammed VI of Morocco, on Monday chaired, at the Royal Palace in Fez, a Council of Ministers, which was dedicated to the adoption of two projects of framework laws, a draft law and several draft decrees and international conventions, acording to a statement by the spokesperson of the Royal Palace.

At the start of the Council, the Minister of Economy, Finance and Administration Reform presented to His Majesty the King the draft framework law on tax reform.

Prepared in application of the high Royal guidelines and on the basis of the recommendations of the National Tax Conference held in May 2019, this project aims to establish an efficient, fair, equitable and balanced tax system, which makes it possible to mobilize all tax potentials for finance public policies, promote economic development and achieve social inclusion and cohesion.

At the African level, these conventions relate to the protection, management and development of the marine environment and coastal areas, the African Union convention on cybersecurity, the protection of personal data, as well as the African Youth Charter which aims to promote the situation of young people, reduce income disparities and develop education systems.

At the Arab-Islamic level, the Council adopted conventions relating to the liberalization of trade in services between the Arab countries and the statute of the Islamic Organization for Food Security, which aims to mobilize financial and agricultural resources in order to ensure food security.