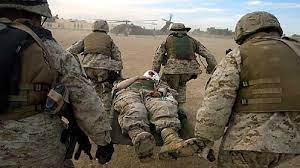 A farmer and his son died Sunday in a roadside bomb explosion in the southern part of Iraqi capital Baghdad, Xinhua news agency reports.
The explosion, Chinese news agency notes citing a statement by the Iraqi Joint Operations Command (JOC), occurred when an improvised explosive device blasted near the farmer’s house in a village.
No one claimed responsibility for the incident. Insecurity in the Iraqi capital has nearly become the order of the day though authorities strive to take control of the entire territory following the defeat of the Islamic State group in 2017.
In a separate report, a rocket was fired on a base housing U.S. forces in western Iraq but did not explode. The Iraqi army reportedly indicated that the rocket launched from an area near the town of al-Baghdadi, some 190 km northwest of Baghdad.
The US troops and the US embassy in the Green Zone in the capital have been targets of repeated attacks from unidentified militias who have been opposed to the presence of the US forces in the country.