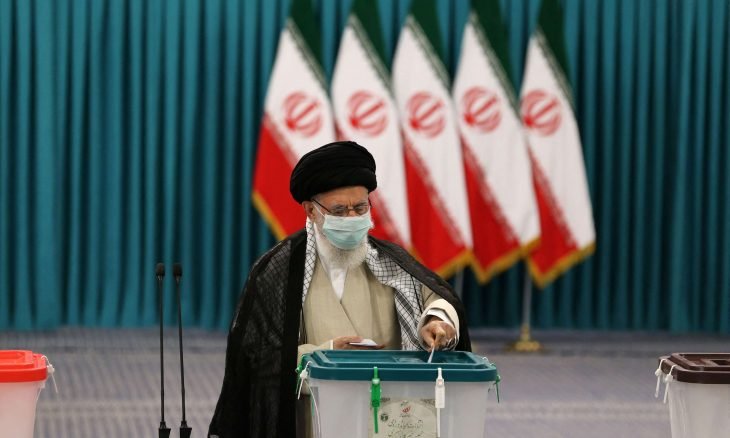 Iran opens today Friday polling stations for 59 million of citizens to elect a successor to outgoing reformist President Hassan Rouhani who has led the Islamic Republic for eight years.
Polls opened at 7 am (0230 GMT) and will close at midnight with possibility of a two-hour further extension owing to health precautions and to avoid overcrowding.
59 million Iranian aged above 18 are eligible for the voting process. Country Supreme Leader Ayatollah Ali Khamenei cast his vote at a special polling station in Imam Khomeini’s Hosseiniya in central Tehran at about seven and three minutes local time (02:33 GMT), reports say.
The guardian of the Iranian revolution called on Iranians to go out to vote at the time turnout according to reports, could be low, around 40 per cent. “Anything the Iranian nation does today will build their future and determine their destiny for years to come,” Khamenei remarked.
“We repeatedly invite people to participate in the elections. The result of their presence primarily affects the people themselves. Of course, the people’s turnout will also help to gain major advantages for the country in the international arena,” he added.
Five candidates including 60-year old head of the judiciary Hojjat al-Islam Raisi are contending for the president position. The Guardian Council, the body in charge of vetting candidacies, validated last month seven candidates for today’s elections marking 13th presidential elections in the history of the Islamic Republic.
Three of the candidates threw in the towel in favor of Raisi and three others namely hard-line conservatives Mohsen Rezaei, a former commander of the Revolutionary Guards, Member of Parliament Amir Hossein Qazizadeh Hashemi and former governor of the Iran’s Central Bank, Abdel Nasser Hemmati.
Raisi, a conservative and believed close to Khamenei is tipped to win the vote He took part in 2017 elections and garnered 38 per cent votes in the elections won by Rouhani.