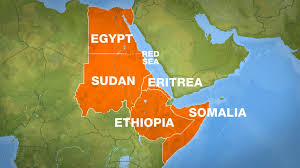 Ethiopia Wednesday said it would build military bases in the Red Sea, citing the race for the control of the region as the rational behind the plans.

Dina Al-Mufti, spokesperson for the foreign ministry indicated that “various countries are showing an interest in controlling the Red Sea region by establishing more military bases than ever before,” a worrying situation for Addis Ababa, Middle East Monitor (MEMO) reports.

Last year, Egypt inaugurated the Berenice Military Base, the country’s largest military site located southeast of the city of Aswan, on the Red Sea.

Besides, Sudan is scheduled to host Russia’s first military base in Africa. Moscow and Khartoum are in talks over the establishment of the base which will be hub for nuclear-powered warships, up to 300 military and civilian personnel in Port Sudan and the ability to ferry weapons into Sudan free of inspections.

Ethiopia is currently at odds with Egypt and Sudan over its Nile River dam deemed by Cairo and Khartoum as a threat to their access to water.