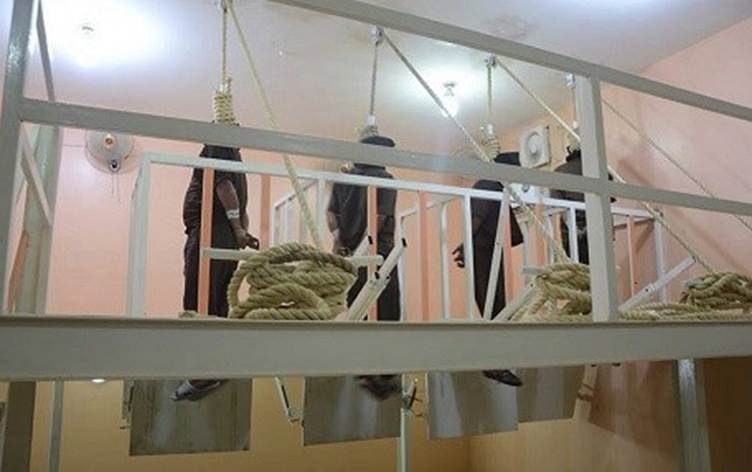 Three people sentenced to death for terrorism in Iraq have been hanged few days after twin deadly terror attacks claimed by the Islamic state group (ISIS) killed dozens of people in capital Baghdad, reports say.
“Three people convicted under Article 4 of the anti-terror law were executed on Monday at the Nasiriyah central prison,” the security source told AFP, on condition of anonymity.
The Middle East country according an official from Iraq’s presidency has more than 40 execution orders “for terrorism or criminal acts” pending.
“We are continuing to sign off on more,” the official told AFP on condition of anonymity.
Another official from Iraq’s presidency, The New Arab reports, Monday said that all the orders were signed after 2014, most of them under ex-president Fuad Massum and at a time when IS occupied a third of the country.
The Monday executions came three days after two ISIS militants blew themselves up killing at least 30 people while wounding dozens of others.
Rights groups have slammed the executions arguing that they are being used for political reasons.
“Leaders resort to announcements of mass executions simply to signal to the public that they’re taking… (these issues) seriously,” said Belkis Wille, senior crisis and conflict researcher at Human Rights Watch.
“The death penalty is used as a political tool more than anything else,” she told AFP on Sunday.
Under a 2005 law, anyone convicted of “terrorism,” which can include membership of an extremist group even if they are not convicted of any specific acts, can be sentenced to death.